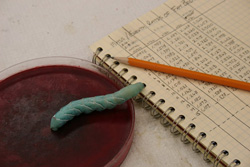 To a physiologist, context (that is, the ecological setting in which an organism lives) is everything. To understand how environmental variation generates tradeoffs and how this affects insect growth, it is essential to study them in their natural context. For this reason, I extended my research to study my focal organism in its natural habitat. This work has been funded by two NSF grants. A currently funded grant is in collaboration with Dr. Robert Raguso of Cornell University (see project 2 below). Another NSF grant was collaborative with Drs. Travis Huxman and Judith Bronstein (EEB/UA) (see project 3 below). Twenty-one undergraduate students, two graduate students and two postdoctoral fellows have been, or are currently, involved in this research.

2) Scale- and context-dependence of relative humidity to insect foraging behavior. What is the relationship between environmental variation and the expression of traits essential to animals’ critical life history functions? In desert biomes such as the arid Southwest, precipitation is the primary driver of biological processes. Rainfall in the Southwest can be highly variable (Davidowitz 2002), and associated with variation in rainfall is variation in relative humidity. There is abundant anecdotal evidence that variation in relative humidity is a pervasive sensory cue that influences behavior across multiple scales. Yet, no studies have examined its efficacy directly. In this project we explicitly test how relative humidity across multiple scales, from that of an individual flower all the way up to whole landscapes, affects foraging behavior, survivorship, flight and reproductive success. We have found that relative humidity affects a moth’s motivation to fly, how far and fast it flies, its survivorship, the concentration of nectar it prefers, and whether it acquires its nectar in a few large or many small foraging bouts (Contreras et al 2013). As part of this project, we specifically assessed the efficacy of variation in relative humidity as a sensory cue at the level of an individual flower. We showed that nectar generates humidity gradients within and immediately above a flower. Hawkmoths can detect these gradients at four percent above ambient and behaviorally prefer flowers that exhibit humidity gradients (von Arx et al. 2012). This study, which has attracted a great deal of press attention, is the first demonstration that pollinators use humidity as a cue for the presence of nectar and that humidity gradients are a reliable cue for the presence or absence of nectar.

3) The physiological basis of species interactions. Organisms obviously do not only interact with their environment, but with other organisms as well. These interactions can also produce variation with which an organism needs to cope. For example, for herbivores such as M. sexta, the quality of their food varies among host plants and throughout the season. We have therefore examined how variation in host plant quality influences its growth and fitness. Datura wrightii experiences a mutually beneficial interaction with adult M. sexta because they are its main pollinators. However, after taking nectar from and pollinating the flower, M. sexta females immediately lay eggs on the leaves. M. sexta larvae are voracious eaters, and one larva can completely defoliate a plant. Thus, while D. wrightii benefits from interacting with the adult moth, it experiences a high cost from interacting with the juvenile. How can an interaction that is simultaneously mutualistic and antagonistic function and persist over ecological and evolutionary time? Using a physiological approach from both the plant and insect perspective, we have shown that the costs and benefits of the antagonistic stage of the interaction are context-dependent on the stages of plant and insect growth relative to each other (Bronstein et al. 2006, 2009, Barron- Gafford et al. 2012).

Research into the mutualistic phase of the interaction shows that M. sexta has an innate preference for D. wrightii flowers for nectar, but in their absence readily takes nectar from Agave palmerii. This came as a surprise, as the flowers of agave show classic adaptations to attract and reward bats, not insects. In fact, we have provided evidence that A. palmerii subsidizes the entire desert grasslands hawkmoth community during dry spells when their preferred flowers are not available (Alarcón et al. 2008, 2010; Riffell et al. 2008). This observation forms the basis for my third area of research, below.

The interaction of D. wrightii with M. sexta is subtler than that of simply providing food. In her dissertation, my graduate student Kristen Potter explored how temperature variation due to oviposition site choice made by the adult female moth affects the survivorship and growth of the egg and emerging larva. Her results show that D. wrightii leaves buffer M. sexta eggs from fatally high ambient temperatures: small differences in temperature profiles among leaves can cause large variation in egg metabolic rate and development time. This study provides the first mechanistic demonstration of how this type of leaf thermal refuge interacts with egg physiology and how these differences carry through from the egg to the early larval stages (Potter et al. 2009, 2011, 2012).